"The Stuff That Dreams Are Made Of" ... Bogart, Shakespeare, The Maltese Falcon, Those Great Movies


I am experiencing a strange kind of writers's block.  My next post was going to be about famous sci-fi movies behind the scenes.  I don't know, maybe I have been struck by a ray from Mars.  In any case, I've been in the mood for nostalgia, not movie nostalgia, but teenage music memories.  With some of them I actually wasn't yet a teenager at all, just a little girl, but they were famous and I heard them a lot then.  So, just for fun, here are a few that made my heart go pitter-pat, made me cry litttle teen tears, or just made me want to dance.

Gene Pitney -- I had forgotten what a darling he was, with a fabulous voice.  He's singing my favorite of his songs on a British American Bandstand-type TV show.  He is obviously lip-synching, as they usually did then, but it's the best version anyway.


The Dave Clark 5 -- I was madly in love with Mike, the lead singer/keyboard player. Now I remember why!


The Animals -- Eric Burdon was a small guy but powerful, and seemed a little dangerous.  This one was not liked by parents, including mine!  I, of course, loved it!

The next two songs are...well...let's just say that after the feminist movement came along, you will never hear their like again.

Shelley Fabares -- Those of you who remember the Donna Reed show will get a kick out of seeing this clip from the show where Shelley sings "Johnny Angel".  You will see Donna, and a young James Stacey, before his terrible accident when he lost an arm and leg.

Joannie Sommers -- There were a lot of Johnny's in those days.  This is another one for which I will be chastised by women a lot younger than me.  Hey, I was just a kid in a different time.  I thought it was so romantic!


John Gary -- this last number is not by a teenage heart-throb, but a very popular singer whose career was cut short by the rock music invasion.  Bell-like tenor voice, just a lovely man with an incredible talent.

Had to add one more -- this is for you, FlickChick!  Darlin' Bobby Darin!

Hope you enjoyed this trip backward in time with me.
Posted by ClassicBecky at 7:27 PM 29 comments:

Corman is Coming - Lights Out, Candles Flicker - Don't Look Over Your Shoulder! 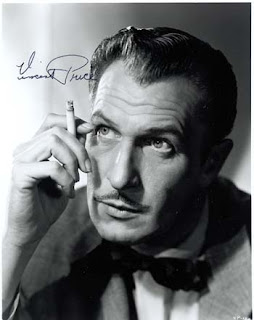 I wish I could decipher personality clues of handwriting, because I think this autographed picture of the great Vincent Price shows a very interesting style of signature!  I'm spotlighting him because I will be writing about Roger Corman's "The House of Usher," starring Vincent on Sunday, June 19th.  My article is just one of many that Nathanael of Forgotten Classics of Yesteryear has put together for a blogathon to celebrate the movies of a horror legend - Roger Corman.  Corman was responsible for unique and varied films, and my favorites are the fright flicks!  The blogathon begins this coming Friday, June 17th and continues through Sunday, June 19th.  Take a peek at the list of wonderful Corman movies you can read about, take notes of those you haven't seen, and enjoy!


Visit Nathanael's site at http://www.forgottenclassicsofyesteryear.blogspot.com/.  You can also click on the picture on my sidebar.
Posted by ClassicBecky at 12:40 PM 5 comments:

Well, Everybody Else Is Doing It!


No, I'm not channeling Sally Field.  Several of my movie blogging friends have inspired me to acknowledge and thank my followers -- I hit 50!  That's a well-rounded and respectable number!  It is such a compliment when someone likes my stuff well enough to be an official follower.  And the names are great!  You should arrow over their pictures and see some of the clever nom de plumes.  Thanks everybody!  I hope you are still enjoying visiting.  I just love having you here.

Welcome To The Brain Food!

Here at the Brain Food, we will talk about every aspect of classic movies, including reviews, history, interesting trivia, fun facts - it's all for the love of the great classic films. For instance, did you know that at the end of "The Maltese Falcon", Bogart says 'The stuff that dreams are made of',' but Shakespeare originally wrote it as 'We are such stuff as dreams are made on'? That brings me to an old classic film freak joke. "What is the last line of "The Maltese Falcon"? Most people say "The stuff that dreams are made of." Not so! The last line is "Huh?" as given by the police detective with Bogart. That always tickles me. There are lots of fun and fascinating things about classic movies, and I like to write about them. Welcome!

I'm from Indiana, a Hoosier all the way (except that I don't like football or basketball, which makes me an unAmerican Hoosier). My blog spotlights classic movies ... the greats and the flops, the fun and history, the personal and societal impact of American film. I'm a voracious reader of classic literature, my favorite music is classical, and I love classic TV ... thus, my nom de plume, ClassicBecky.

Click on the lion's nose for my winning article, "Mobsters, Pals and Skirts -- The Golden Age of Gangster Movies"

The Best Group On The Net!

Vincent Price and Edgar Allen Poe - What A Combo!

As the sun was setting on The Great Flynn's life and career, he gave one of his best performances

"The Sun Also Rises" ... click on Errol's orange scarf to find my tribute to his performance as Hemingway's tragic character, Mike Campbell

Oh how Shakespeare would have loved cinema...

Click on the villainous king's crown to find my review of both Laurence Olivier's and Ian McKellan's film versions of Richard III.

The Greatest Movie Fairy Tale of All

Click on the candle to see my piece on The Red Shoes, a film that is as close to a living impressionist painting as you will ever see

This is my idea of a holiday greeting card!

Click where the swords cross to see an enlarged version ... Created in friendship by Flick Chick - The Great Flynn, my first love ... this is a keeper!

The Great Flynn has once again gotten in touch ...

His messages always come through my good friend FlickChick!

Another of Marsha's masterpieces

The Love of Reading

"It was books that taught me that the things that tormented me most were the very things that connected me with all the people who were alive, or who had ever been alive." ... James Baldwin

There have been others -- some just wonderful -- but these are the originals!

Home studio for Errol Flynn, Cagney, Bogart -- so many other greats

Number One In My Book

The lady with the torch...

Drama is my first love in movies ...

Glad it's not A Fascist Production ...

Charming, dashing, and a better actor than most gave him credit for...

The USA, out front!

Simple logo for a great studio ...

Awarded by Dawn of Noir and Chick Flicks

Thanks to Yvette for honoring my blog with a Liebster Award!

Click on the picture to visit Yvette's great book and movie site!

It's A Shame You Can't Eat An Award!

Many thanks to Dawn of Noir and Chick Flicks and Clara of Via Margutta for honoring me with this sweet dessert!

Freedom or Death, The Greek Passion, Zorba the Greek

A great old gal who I sometimes channel!

Richard III, Henry V, Macbeth, Hamlet - too many to list

The Haunting of Hill House, We Have Always Lived In The Castle

Had to have just one more

The original bloodsucker himself

The creepiest Dracula ever

The sexiest Dracula ever

The tallest Dracula ever

The Hunchback of Notre Dame